On the feelings of words 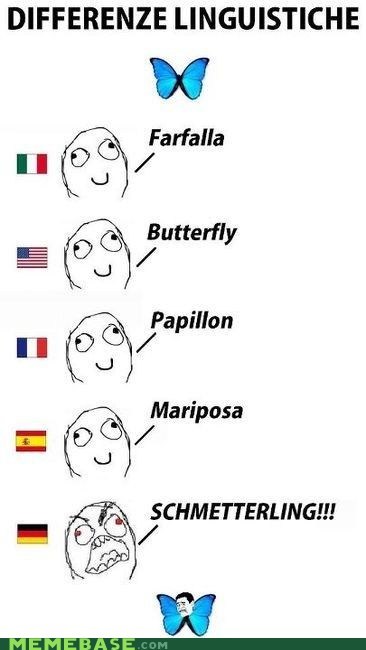 Have you seen this meme? It invokes the beautiful concept of fanciful, colourful butterflies, and takes us on a linguistic journey: farfalla in Italian, butterfly in English, papillon in French, mariposa in Spanish and... wait for it...

Okay. So right now I have something to admit: I am actually a closet linguistics nerd. In university, my major was computer science, but my minor was french linguistics. And so I actually get really excited about words, and it's cool to think about how a simple jumble of sounds—even in a language we don't know–can make us feel a certain way.

So here's the question that kept bugging me, ever since the day I saw that picture shared on Facebook:


What is it about the way schmetterling sounds that makes it sound so... horrible?
(No offense, German friends.)

First things first. Have you heard of the Bouba-Kiki effect? If you haven't seen it before, take a look at the image below, and tell me:

Spoiler alert! Watch out, here comes the answer! It's coming! Ok. Here it is. :)

Other experiments with images like the one below have shown similar results. Here we have keiki / bouba, goga / titei, and tukiti / mabuma. What do you think? Common sense? 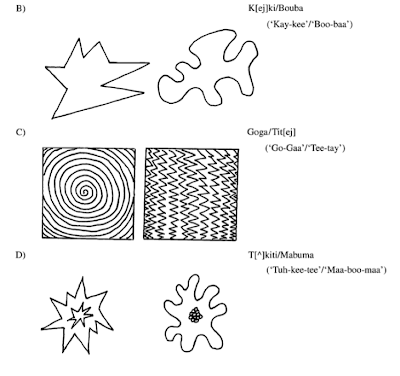 Humans are pretty amazing. Somehow, we're able to match up words we've never heard, to pictures we've never seen. And across cultures, we match 'em in the same way. So this insight brought me to the question: Are words (like butterfly) assigned arbitrarily? Is it a complete coincidence that words for butterfly sound pretty (that's a scientific term)?

Ferdinand de Saussure, who is the father of "l'arbitraire du signe" would like us to think the answer is Yes. Completely arbitrary. He says that there is absolutely no relationship between the "signifié" -- the concept (e.g. a colourful and light flying insect) and the "signifiant" -- the word (e.g. "butterfly", "farfalla", etc). No relationship at all.

Well, luckily, 100 years later, we have this neat statistical machine called a computer, so I decided to crunch some numbers. Whee! ^^;

I took a bunch of words from the ANEW (Affective Norms for English Words) Database. It contains 2000 English words, and each word is rated on 3 emotional scales: pleasantness (aka. valence), arousal, and dominance. For example, the first word on their list is abduction. It scores:
In summary: when I say abduction, you get a pretty unpleasant–though rather aroused–feeling, with a smattering of powerlessness.

How about something a bit more adventurous. Like... adventure!

Adventure: 7.6 pleasant, 7.0 arousing, 6.5 dominant. That is a pretty good word. Happy, arousing, and right up there with superman on the dominance scale.

Here's what I did next. I took all the one-syllable words from the database and grouped them into positive and negative words based on ANEW's "valence" ratings.

Then I took their IPA (phonetic) transcriptions, and had a look at the vowels in the words. In particular, I looked at something called vowel height. The vowel \i\ is called a high vowel, because if you make the sound "eee" (like with a big smiling face) your tongue is jammed right up near the top of your mouth. High vowel.

The vowel \a\ (like the sound you make at the dentist) is a low vowel. And here's what I found.

For those of you who know how to read vowel charts, here's what it looks like:

From a language evolution perspective, it might be that words that make us "smile" (like those containing "ee") have been preferred for positive words. Maybe words aren't arbitrarily chosen after all. But we'd need more data points, especially in other languages to make a more substantial claim.

So, the next time you're looking for a company name (or your child's, for that matter), keep this (very general) rule of thumb in mind:

I've a few other hypotheses about other sounds like fricatives ("sh", "zz", etc.) and length of words... but I'll save that for next time. Hope you found something useful from this post.

By the way, don't believe my result at decoding the captcha, i AM a robot. Except when I listen to Edith Piaf. Which might be explained by your above article, I have to think about this... Thanks for bringing it up, it is interesting!

Thank you for this awesome article Angelica!! Words and their power are fascinating. I've quoted your article in my post about language and creation: http://ouzepo.wordpress.com/2014/08/02/speak-your-own-universe-language-and-creation/